Today’s modern-day reef aquarium hobbyist either uses natural seawater in their aquarium, or they mix up fresh seawater using the myriad of artificial salt mixes that are commercially available in the Australian market. Regardless of their choice, either option will require the use of freshwater. Whether it is used to mix up their artificial seawater or replace evaporation in the aquarium, there is no denying the constant need for freshwater in a saltwater aquarium. Even with new holistic styles of reefkeeping, such as the Triton method, where water changes are omitted altogether, the basic need for pure, uncontaminated freshwater is a basic requirement for any reef aquarium hobbyist.

With Australian tap water containing chlorine, chloramine, copper and a slew of other compounds and elements that are toxic to marine life, we simply cannot depend upon it as a source of freshwater for our aquariums. Unless of course, we can first purify it, making it suitable for use in a reef aquarium. This is something that is easily achievable with today’s reverse osmosis and deionisation technologies.

It is a fair assumption that if you have a reef aquarium or are looking to set one up, you have either heard of RO/DI or have made the sound choice to purchase a system. However, you may not fully understand how it all works or why you really need one. This article will spell it all out and give you a firm understanding of what contaminants are present in Australian tap water, as well as what RO/DI is and how it all works. It will help you to understand why you cannot afford to be without an RO/DI system if you are wanting to be successful in the reef aquarium hobby.

What’s so bad about our tap water?

Australian tap water is rated as one of the most drinkable in the world. Compared to other places in the world, our tap water is exceptional in quality and authorities work tirelessly to keep it this way. Rigorous testing ensures that levels of known contaminants are kept at levels that can be tolerated by human beings, however, just because levels are deemed safe for humans, does not mean that it is safe for the animals in our reef aquariums.

Even before the water reaches the various water treatment plants across the country, it can already carry high levels of nitrate, phosphate, silica and potentially toxic metals such as chromium. Once it does reach our water treatment plants, contaminants such as chlorine and chloramines are intentionally added to disinfect the water, making it safe for human consumption. Other chemicals and elements are sometimes added to raise pH. This is done to limit the amount of corrosion which can occur as the water travels through pipes, becoming contaminated with lead and copper.

One of the most troublesome contaminants for reef aquarium hobbyists is chloramine. It is a bonded combination of nitrogen (ammonia) and chlorine, used as a disinfectant which can out-live chlorine. It will not dissipate like chlorine will and can be a challenge to remove. Unfortunately, it is also highly toxic at levels much lower than those found in even the least treated Australian tap water supplies.

Also of grave concern is copper contamination. Human beings can tolerate levels of copper in drinking water which are 10 times higher than the tolerance levels of most of the invertebrates in our reef aquariums.

This table lists some of the parameters and detected levels, tested by Sydney Water, in the Prospect East delivery system in 2017:

So What Can An RO/DI System Do to Help?

An RO/DI system, as a minimum will consist of 3 separate filters. The first type is the pre-filters which capture sediment, organics and disinfectants, followed by a reverse osmosis membrane which water flows through as it is stripped of the bulk of contaminants. The reverse osmosis membrane does most of the heavy lifting, removing the majority of contaminants before receiving a final polish by the DI (deionisation resin).

The sole purpose of this stage is to trap and remove as much sediment as possible. In doing so, the carbon filter/s are protected from clogging which in turn protects the RO membrane from oxidisers and particulate matter such as rust.

There are 2 types of carbon filters regularly used in modern RO/DI systems. These are carbon blocks and granular activated carbon. Each type is slightly more efficient at filtering different types of disinfectants and other organics. Without these filters, the RO membrane would be rapidly oxidised by the chlorine and chloramines, causing permanent and irreversible damage. By having both a carbon block and granular activated carbon filter, the amount of surface area and contact time is dramatically increased, ensuring absolute removal of disinfectants.

The RO membrane is made up of a porous organic polymer. The commonly used Thin Film Composite (TFC) membrane is the most expensive type available, however, it is also the most effective at impurity rejection. The basic principle around how these membranes work is that the membranes pore size is made just a bit larger than that of a water molecule. This means that water can pass through, although larger molecules and compounds cannot. 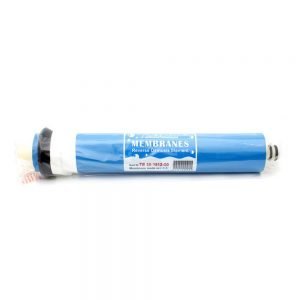 To function correctly, an RO membrane is coupled with a flow restrictor which causes pressure to build on the upstream side of the RO membrane. It is this pressure that forces the water molecules through the RO membrane, leaving the majority of contaminants behind. With insufficient pressure, usually caused by a lack of pressure in your homes water supply, this process can be less effective, allowing more water to pass through the restrictor and down the drain. Pressures between 50-100 psi are the most effective at producing the highest volume and quality of product water. Studies have shown pressures of 80-100psi producing the best rejection rates.

However, these membranes are not capable of stopping all contaminants and compounds from passing through. Those that do get through can be of concern to the reef aquarium hobbyist, hence the need for a final stage of DI resin. 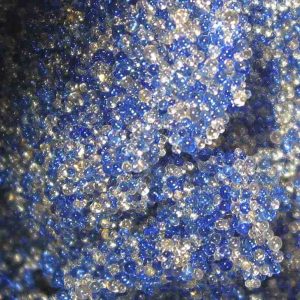 The final filter in an RO/DI system is the deionising resin and this is the stage responsible for the final polish, reducing the TDS to 0 ppm. It removes all of the remaining contaminants that the RO membrane has failed to filter out. DI resin traps all charged molecules passing through it.

To catch these ions, the resin consists of porous beads that have fixed charges attached to them. Normally, there are different beads intended to bind cations and anions. In a mixed bed DI resin, the beads are mixed together in a single filter and this is a very effective type of resin for product RO/DI water for a reef aquarium.

So in conclusion, there is no doubt that RO/DI as a technology is the reef aquarium hobbyist’s most effective method of adequately purifying your homes tap water. It is the only way to have peace of mind. We all know that stability in water chemistry is the key to success in the reef aquarium. By ensuring that you only use RO/DI water that you have produced in your aquarium, you can rest assured that you are not indirectly dosing your reef aquarium with a list if unknown contaminants.